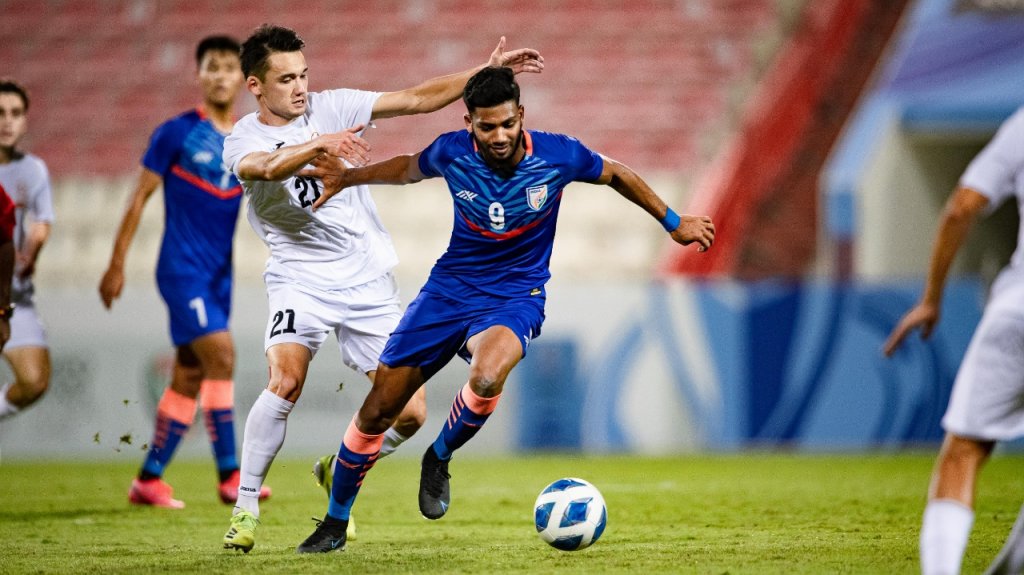 India defeated Kyrgyzstan by a penalty shootout 4-2 in the final match of the Group E of the AFC U23 Asian qualifiers to finish in second place. However, they failed to qualify to the final tournament, with the four best second-placed teams after the group stages to make the cut.

Goalkeeper Dheeraj Singh's heroics under the woodwork did wonders for India as the boys had their best-ever finish in the AFC U-23 Asian Cup Qualifiers to date. As their final qualifying match against the Kyrgyz Republic ended in a stalemate at the Fujairah Stadium on Saturday (October 31, 2021).

Earlier, UAE beat Oman 2-0 to end as the toppers of Group E in the AFC U-23 Asian Cup Qualifiers. As the match between India and Kyrgyz Republic ended in a stalemate, both sides finished the group on four points apiece, with the same goal difference (zero), and equal number of goals scored in all the matches (2). To decide who takes the second and third spots, respectively, in Group E, a penalty shootout was held, which India won 4-2.

In the penalty shootout, Dheeraj started with a couple of spectacular saves while Rahul KP, Rohit Danu, Suresh Singh, and Rahim Ali scored from the spot.

India coach Igor Stimac made only one change to the starting XI from the previous game, handing Amarjit Singh his first start in this campaign as he replaced Jeakson Singh in the middle of the park.

Apuia tried to hurl the first attack in as early as the fifth minute but his long-ranger could not pose any threat to the Kyrgyz defence.

Rahim shielded off Artiukov Daniil before rolling it to an onrushing Vikram whose left-footed effort flew away from the target in the 21st minute.

The forward played another pivotal role a minute later as he passed the ball to Amarjit, but the Manipuri midfielder skied his effort after four minutes.

Borubaev Gulzhigit beat the offside trap to outpace Asish Rai from the left, but Dheeraj came up with a spectacular save after the half-hour mark to keep the score unscathed. Both teams headed to the changing room with the scores unchanged at the lemon break.

Kyrgyz Republic resumed with more intent and came close to breaking the deadlock in the 50th minute but Maksat skied his effort.

India appealed for a penalty on the hour-mark anticipating a handball inside the Kyrgyz box but the Maldivian referee Mohamed Javiz paid no attention to it.

India latched on their best possible chance seven minutes later when Deepak Tangri put an acrobatic bicycle kick from handshaking distance, only to be thwarted by Kyrgyz goalkeeper Tokotaev Erzhan.

India's pursuit for the winning goal could have come three minutes later, but Rahul's fierce shot from 30 yards out came agonisingly close to breaching the indomitable Kyrgyz defence, only to have ricocheted off the post. On the rebound, Vikram tried his luck but Erzhan jumped to his left to negate the danger.

Ten minutes to the end of regulation time, substitute Rohit Danu could have opened the scoreline, but Narender's shot from an acute angle was fisted away by the goalkeeper leaving the Indian dugout aghast.

At the other end, Kyrgyz broke away on a counter-attack, exploiting a mistake by the defender. His backpass was anticipated by Sharshenbekov Arlen inside the box and he left it to an onrushing Abilov Ernaz, who snuck into the penalty box unmarked. Dheeraj, however, positioned himself perfectly to save it with his usual composure in the 85th minute.

With just minutes of regulation time left, Suresh lobbed a looping free-kick and Deepak Tangri fired it from close range, only to seen it saved by the opposition goalkeeper.

With both teams tied on the same number of points, goal difference, and goals scored, the match went into a penalty shootout to decide who finishes second and third, respectively, in Group E.

Dheeraj made a couple of scintillating saves in the penalty shoot-out before Rahim Ali scored the winning spot-kick to elevate India to the second position in the group.