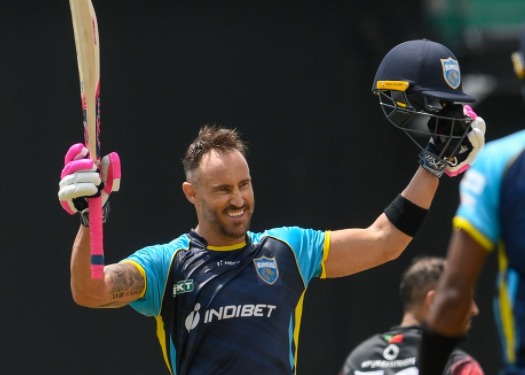 Faf Du Plessis scored 120 not out against Patriots

St Kitts won the toss and elected to field first on the fresh pitch which was perfect for batting. St Lucia openers Andre Fletcher and Faf Du Plessis provided them the ideal start scoring 76 runs for the first wicket.

Plessis then had an unbroken 124-run partnership with Roston Chase who scored an unbeaten 64 runs off 31 balls with three sixes and seven fours. Kings scored 224 runs at the end of the innings. In reply, Patriots were bundled out for 124 despite Evin Lewis's 42-ball 73.

The Kings will play against Patriots once again on Sunday and Plessis will look to carry on from the where he left on Sunday.

OUTSTANDING!!! What a performance by @faf1307 120 not out which wins our @fun88eng magic moment from match 15. #CPL21 #SLKvSKNP #CricketPlayedLouder #Fun88 pic.twitter.com/bnmqDpxNF4