CWG 2022 | I just have to be myself to score well, claims Jemimah Rodrigues

CWG 2022 | I just have to be myself to score well, claims Jemimah Rodrigues 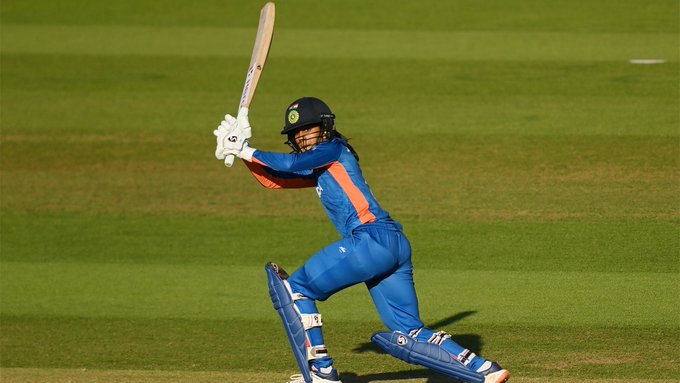 Jemimah Rodrigues reinforced her belief in her abilities by stating that she just needs to play her natural game to score runs consistently, revealing Smriti Mandhana had given her the same advice years ago. She further talked about her role in the Indian team and experience at the Hundred.

Jemimah Rodrigues has made waves in the Indian women's game ever since she burst onto the scene. A prodigy in every sense of the word, the 21-year-old has already represented India in an astounding 77 games, racking up over 1,500 runs and registering 10 half-centuries. Even though a slight slump last year had seen her sit out a few games for the national side, the top-order batswoman is back to her best and leading the Women in Blue to victories.

The youngster has revealed her good friend and partner-in-crime Smriti Mandhana had advised her to player her natural game and keep confidence in her abilities to be successful, instead of trying to emulate other successful cricketers.

"Smriti had told me long back in the IPL [Women's T20 Challenge] in 2019 that you don't have to be a Harmanpreet Kaur or a Smriti Mandhana. You have to be a Jemimah Rodrigues. I think I have understood that role and it's helping me," Jemimah said to Times of India to BCCI.

Rodrigues is lying about her trade for the Indian team in Birmingham at the Commonwealth Games. In her latest outing against Barbados, she strolled her way to a flamboyant 56 not-out to steer India to a 100-run triumph. Initially an opener for the side, Rodrigues has recently been playing at number three since Shafai Verma has been doing well as an opener alongside Mandhana. However, the batter expressed no issues with the change, saying she was in favour of the decision made by the team.

"The team has given me a role. If I can play that role, it doesn't matter how other people look at it. If the dynamics suit our team, we have Shafali, Smriti, Harman, so I just want to play the best role I want to play for the team," she expressed.

A crucial feature of Rodrigues' half-century in India's last pool game at the tournament was that her innings were laced by six magnificent boundaries and just one maximum, highlighting her ability to pierce fields. The Mumbaikar stated she was aware of her strengths and was working hard to apply them practically while still trying to improve other aspects of her game.

"Definitely, I've worked on my power game, but more than that, I've understood my game better. I'm not a power-hitter, I'm a placer. I can hit the (gaps for) singles and doubles well; I know how to manoeuvre the field. I think that is my strength," she said.

"My game is not very flashy but even without that, I end up with a good strike rate. That is what I have realised I don't have to be someone else; I have to be Jemimah Rodrigues to score. This is what has helped me."

A big milestone in the young career of the fledgling batter was the inaugural season of the Hundred Women, where Jemimah simply demolished the competition. I seven games, she managed a stunning 249 runs averaging over 40, while striking at 150.90 and finished second in the list of highest run-getters in the tournament.

"The best thing about the 'Hundred' was the opportunity to get to play in English conditions, which I wouldn't have gotten normally," Jemimah said.

"Any match, even if it's a domestic game, I think when you go out there and score runs, you get confidence. And that is what happened to me. I was blessed that I got to play for the Northern Superchargers. I had a good season there, and I just wanted to continue that because the more I play, the better I do and the more I learn. I just want to apply that whenever I play for India," she concluded on the matter.