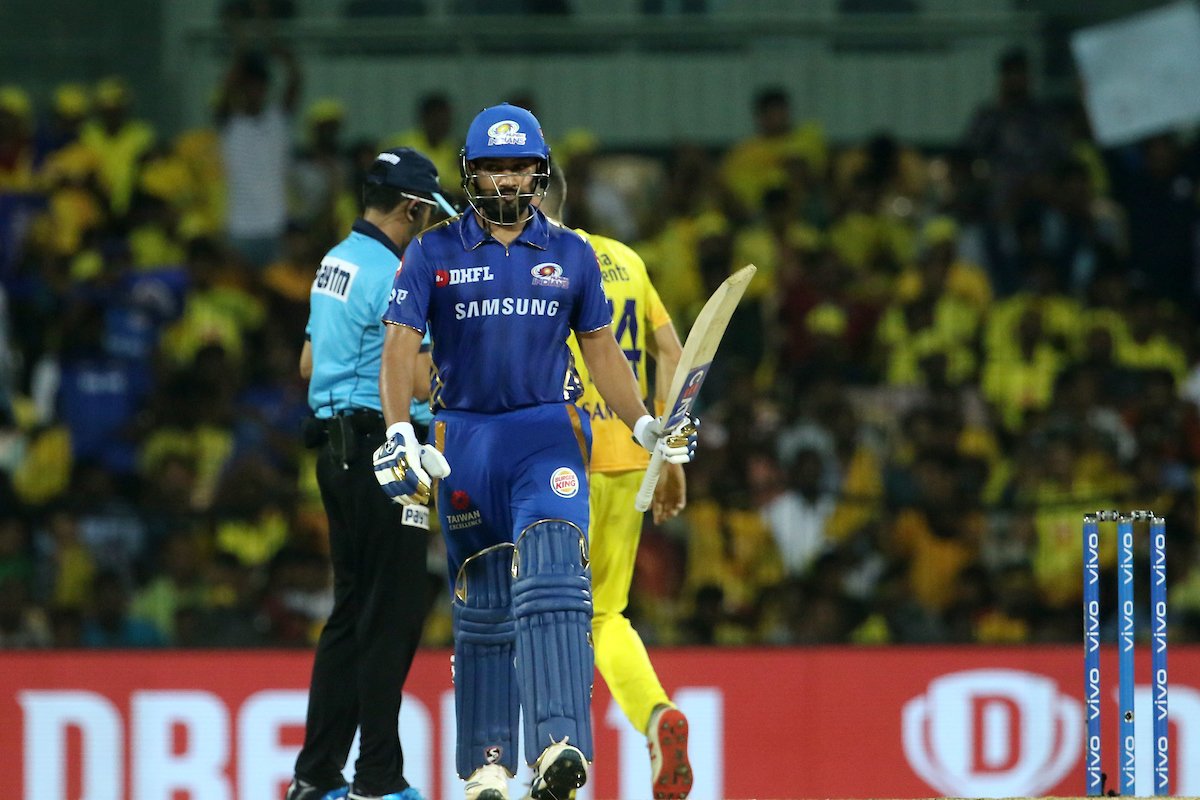 A breathtaking ton from Mumbai Indians skipper Rohit Sharma, who hit 11 fours and 3 sixes in his 71-ball 110, propelled the defending champions to a convincing 76-run victory over Rajasthan Royals. Chasing 209, the Royals started off in fine fashion but faltered in seconds to slump to defeat.

After being put into bat, it didn’t take long for both Rohit Sharma and de Kock to start seeing the white cricket ball like a Football, as they ravaged the RR bowlers upfront to fly to 43/0 in no time. Mumbai then encountered a major setback as they lost three wickets - de Kock, Yadav and Lynn - in the space of three overs, but at this point in time, RR had no idea what was about to strike them. Post the mini-collapse, with MI 67/3, Rohit turned on ‘God Mode’ as he blasted an astounding 14 boundaries en route an unbelievable ton. Through able support from the younger Pandya, the skipper propelled MI to a formidable total of 208/5 at the end of their innings.

Robin Uthappa’s dismissal in the very first over convinced one and all that the game was going to be a no-contest, but in no time, Buttler and Samson got together to shatter the prejudice. Together, the duo put on 60 runs off just 37 balls and kept RR in touch with the required rate and at one point, even invoked a few nervous stares from the MI fielders. However, the fairytale came to an end in the 8th over, when Samson perished, after which the inevitable happened - a major collapse to shift the game in MI’s direction. Buttler departed with the score 98/2 and RR, remarkably, lost their next 6 wickets for just 12 runs. The last six or so overs were then mere formality as MI choked the Royals’ tail to win the game by 76 runs.

You can check out the match tracker and live scorecard here

Sanju Samson’s dismissal in the 8th over was what diminished RR’s hopes of pulling off the impossible. Along with Buttler, the Keralite made batting look so easy for 8 overs and at one point, it looked like RR were right in the contest, but his dismissal triggered a paradigm shift that eventually became irreversible.

He did it again. Yes, he did it again. That goddamn opener, Rohit - he makes the art of batting look so easy, doesn’t he? It is remarkable how he keeps scoring white-ball tons at will. 110 is what he managed today and I presume it’s pretty self-explanatory that his knock was the undisputed ‘high’ of the game.

Not one, not two, not three but Rajasthan Royals bowled a staggering FOUR NO BALLS on the day. It looked like the Royals bowlers had left ‘discipline’ back in the locker room when they walked onto the field. The ill-discipline on display was unforgivable and it was flabbergasting to see a top tier T20 side sink to such a low when it came to maintaining discipline with the ball.

MI started the powerplay off in trademark MI fashion - a bit slowly, a bit sensibly, taking just 7 off the first over - but all hell broke loose after the third over from Ankit Rajpoot, which accounted for 14 runs. Both de Kock and Rohit, from the very first ball of that over, put their foot on the pedal and struck 26 runs off the 11 balls that followed to hand Rajasthan a royal thrashing with the new ball. MI then lost de Kock in the 5th over, but just when they looked to end the powerplay on a high, regardless of the southpaw’s dismissal, courtesy Lynn, the Aussie departed on the very last ball as MI ended the phase on 57/2; a slight setback towards the end.

Uthappa’s dismissal in the fourth ball of the innings invoked the fear that this would be one of those one-sided games but thankfully, much to the neutral’s relief, Buttler and Samson had other ideas. After seeing off the first two overs - scoring just 10 runs in them - the two elegant right-handers teed off and took 42 runs off the last four. Their onslaught featured six fours and two sixes and by the end of the powerplay, they made everyone watching the game utter the word ‘game on’, as they reached 52/1. A much-needed energy boost for both themselves and the fans.

Just 10 runs and a wicket - of Suryarkumar Yadav - off the first 10 balls of the phase spelt disaster for Mumbai, threatening to undo the great start they had, but adamant to not let the advantage slip was skipper Rohit Sharma. After playing second-fiddle to QDK in the powerplay, Rohit unleashed himself in the middle overs and carved the RR bowling apart - single-handedly. Despite eventually losing Pollard, too, the Hitman beasted his way to 69* at the end of the 15th over and took his side to 139/4; 82 runs came off this phase.

Given they did not have a Rohit Sharma who could bat all 20 overs, RR desperately needed both their set batsmen to bat through the middle to get them closer to the target, but much to their dismay, both Samson and Buttler were sent back to the hut after crossing the 30-run mark. What this meant was that the onus was on Smith and Stokes to do the impossible and while the latter succumbed on just his third ball, the former unleashed a fine 16-ball onslaught before falling prey to Krunal Pandya himself. It was massacre post Smith’s dismissal as RR endured a collapse to finish the middle overs on

As a bowling side, there are few sights more mortifying than coming up against a well-set Rohit Sharma at the death. But as if the situation wasn’t bad enough, Tom Curran made life a living hell for his side by astonishingly bowling NINE EXTRAS in the 17th over. And that was exactly the invitation Rohit needed, as he bulldozed his way to YET ANOTHER T20 century. He eventually finished on 110 and with due help from Pandya, the right-hander propelled MI to an astronomical 208/4; a ridiculous 62 runs came off the last 4 overs.

Heading into the final five with the score 110/8, it came as a pleasant surprise that Rajasthan managed to stretch their innings till the very last over. That said, the MI bowlers did keep their discipline and did not leak runs, and their consistency paid off right at the end as Dhawal Kulkarni removed both Gopal and Unadkat to hand his side a 76-run win.

The match was, no doubt, elevated by Rohit Sharma’s ton and fireworks from Buttler and Samson, but from a team vs team standpoint, it was one way traffic from ball one and that didn’t make for great viewing. A decent watch, nevertheless, thanks to Rohit’s brilliance.