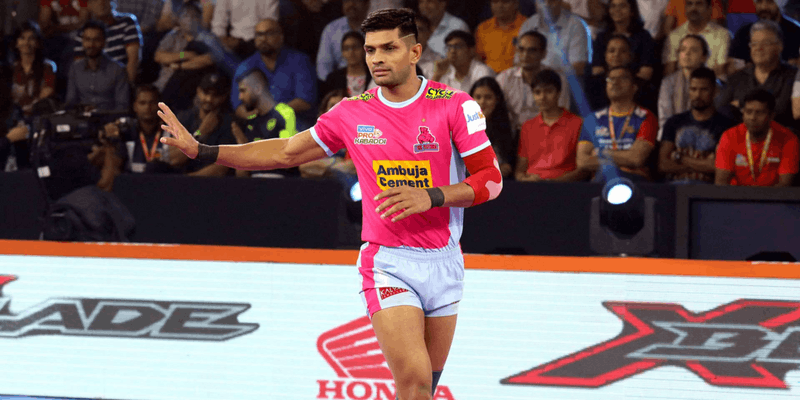 With Season 9 of Pro Kabaddi a day away now, preparations for all 12 franchises will be in full swing before first match starts October 7. While raiders will be sharpening their attacking skills and defenders look to stay solid, all-rounders will have to be on top of their game in both departments.

Here is a look at the all-rounders to watch out for:

Vijay was an integral part of the Dabang Delhi K.C. lineup in the previous season and helped them win the title by consistently performing for the team. The reliable all-rounder mostly contributed as a raider, scoring 157 raid points along with five tackle points. In Season 8, Vijay had a success rate of 42 per cent while raiding and 29% while tackling. Although raiding is his biggest strength as his 292 raid points overall suggests, it’s worth noting that he’s scored his fair share of tackle points (69) over the years as well. After a title-winning season last year, Vijay will be looking to kick on and improve on his vivo Pro Kabaddi Season 8 points tally of 162 points in the upcoming campaign.

Deepak Hooda is one of the few players to have participated in every edition of vivo PKL since its inception in 2014. An experienced campaigner who is comfortable in defence and while raiding, Deepak Hooda has shown his intelligence on the mat over the years. Capable of absorbing the pressure, Deepak Hooda knows how to perform according to the situation and has risen to challenges for his teams in the past. He scored 120 points - 117 raid points and three tackle points - last season but wasn’t retained by Jaipur Pink Panthers for Season 9. Instead, Bengal Warriors have shown great faith in him and brought the all-rounder into their squad. Deepak has played 140 matches so far and has scored 973 raid points as well as 90 tackle points in his vivo PKL career so far.

Mohammad Nabibakhsh is undoubtedly amongst the best foreign players in vivo Pro Kabaddi and he has proven his worth time and again since starting his career in 2019 with a title-winning Bengal Warriors team. The Iranian all-rounder put on a stellar show for the Warriors over the last two seasons and scored 230 points, of which there were 181 raid points and 49 tackle points. He scored 89 raid points and 19 tackle points last season and will be keen to improve on that tally in the upcoming season with Puneri Paltan. He along with his countryman Fazel Atrachali will be hoping that the title-winning duo’s experiences with their former teams can help guide Puneri Paltan to a vivo Pro Kabaddi triumph.

Rohit Gulia has been a reliable all-rounder in vivo Pro Kabaddi ever since his debut in Season 5 with Gujarat Giants. After getting a taste of the action in Season 5 where he notched up 38 points, he scored 61 points in the following campaign. However, it was in Season 7 that he enjoyed himself the most and his numbers that read 132 raid points and 10 tackle points is a testament to that. He didn’t have the best of seasons last year with Haryana Steelers but still managed to score 69 points in 15 matches. However, he’ll be eager to better that tally in Season 9 and ahead of the new campaign with Patna Pirates, Rohit Gulia will be looking to replicate the form he showed while at Gujarat Giants where he accumulated 241 points in three seasons as an all-rounder.

Nitin Rawal is a player who has frequently stepped up when his team needed it the most and delivered by rescuing his side when they were in trouble. The all-rounder has played 59 matches in vivo Pro Kabaddi for Jaipur Pink Panthers and scored a total of 192 points during his time with the Season 1 champions. Out of his 192 points, as many as 133 are raid points while the remaining 59 are tackle points, which offers a good indication that he’s sharp in both departments of the game. Nitin was roped in by Haryana Steelers for Season 9 and since he’s the only all-rounder in the squad, it goes without saying that his performances will be pivotal not just for the outcome of his team’s results but also the balance of the side.