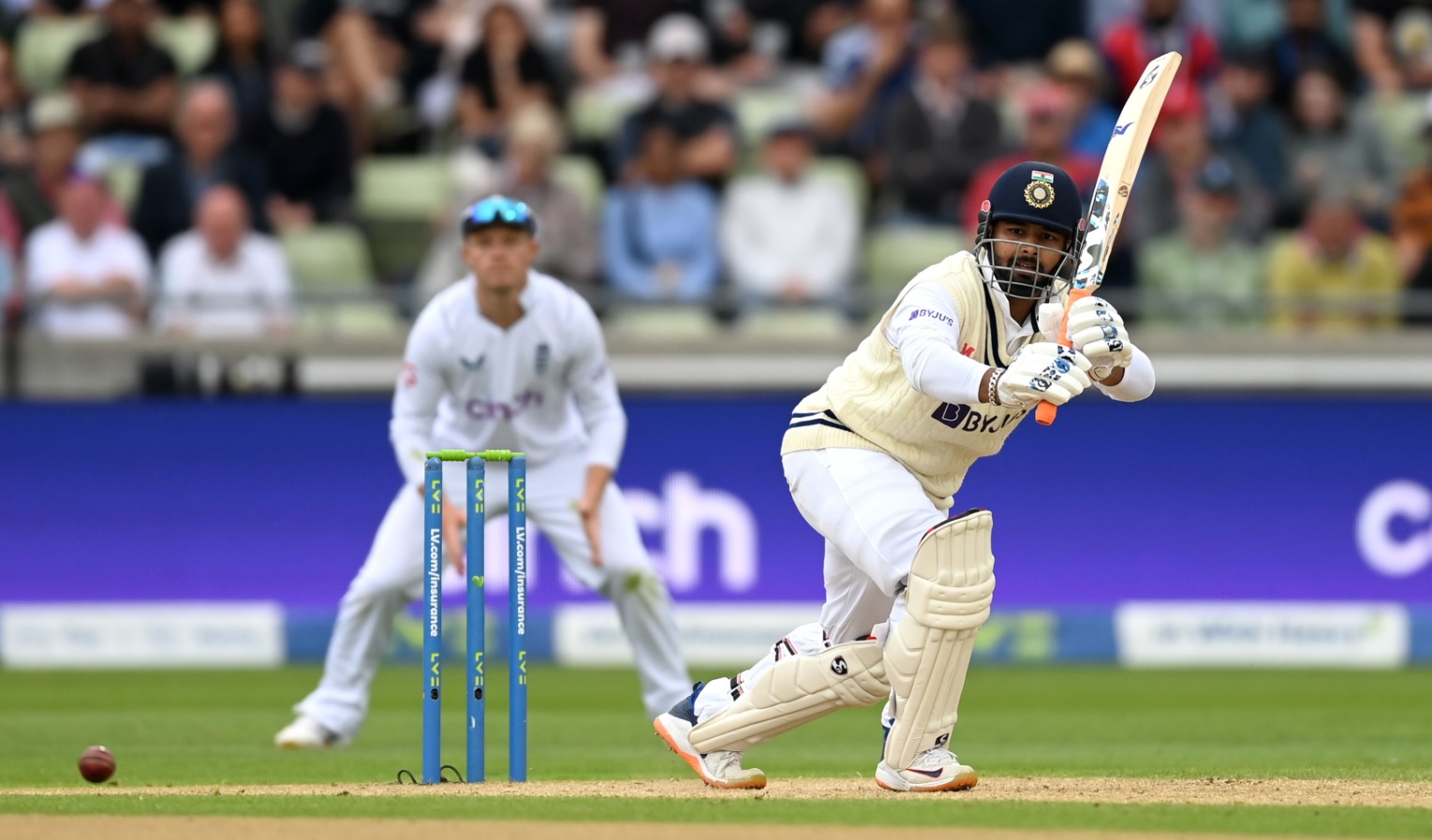 Rishabh Pant hit an entertaining 111-ball 146 vs England at Edgbaston.

After a disastrous T20I series versus South Africa, Rishabh Pant has silenced the critics by aggregating 203 runs from both innings at Edgbaston at an exciting strike rate of 103.05. Thus, the focus will be again on him from July 7 when India's limited-overs series versus England will get underway.

Just over three weeks ago, when South Africa were touring India for a five-match T20I series, Rishabh Pant was picked as India’s captain for the first time. The latest appointment for the country’s top post – by then of course –  came due to KL Rahul’s groin injury in the eleventh hour.

Then, in his first assignment, all Pant had managed to receive were heavy criticism from the former players and the fans. Although the five-match series was shared 2-2, Pant’s on-field decisions as well as his repetitive mistakes while stroke playing even brought an alarming debate about his place in the Indian squad for the upcoming T20 World Cup, scheduled to take place in Australia later this year.

Though, Pant’s struggles in limited-overs cricket are nothing new in his short career. From 22 innings in ODIs, the swashbuckling ‘keeper has only managed to aggregate 715 runs so far, averaging 32.5 and a strike rate of 109.33. Easily, with the talent pool India have got, the numbers must go up for survival.

Despite being the aggressor for Delhi Capitals in IPL for quite some time, Pant’s records after 48 T20Is are nothing spectacular either. So far on the international stage, he has scored 741 runs in the shortest format at a considerably low strike rate of 124.12. Thus, the uncertainty regarding his place in the next ICC event was no surprise at all.

But then, when it comes to Test cricket, Pant looks like a completely different batsman altogether. No, his playing style does not change there by any means, but the consistency, and his knack of being the standout performer when his teammates bite the test make him a unique character.

Even at 24, Pant has already hit Test centuries in England, Australia, and even in South Africa where most batsmen fail to make any substantial impact more often than not. These crucial contributions have helped him to get the label of one of the unicorns of Indian cricket even at such a young age. And then, after what he did at Edgbaston during India’s fifth postponed Test versus England just added another feather in his cap.

It all started with a fine 87-ball 76 during India’s four-day warm-up match against Leicestershire, and Pant carried the momentum with an outrageous batting display at Edgbaston. It can be described as ‘Cricketainment’, a term Yorkshire former chief executive Stewart Regan used while sending emails to other county executives back in 2010.

In the first innings of the fifth Test, Pant’s 100 – his second in England – came off just 89 balls, the quickest to reach the landmark at the venue in Test cricket’s history. More importantly, he had walked into bat at No. 5 when India were left reeling at 98/5 and continued to march on scoring 146 off 116 balls, with 20 fours and four sixes. He got able support from Ravindra Jadeja in their memorable 222-run sixth-wicket partnership, but his counter-attacking intent throughout his stay was lauded by many former players on social media, including Virender Sehwag, an Indian batting stalwart who used to play in a similar fashion during his playing days.

Pant is in a league of his own.
The most entertaining cricketer in the world, this is a special one. pic.twitter.com/PgGTjgxUd9

In the second innings, spectators across the world witnessed a calm and composed Pant who had no hurry to get the runs quickly like his familiar style of play. By crossing 50, he became the first Indian wicket-keeper to score a hundred and a half-century in a single Test match away from home. But then, Jack Leach came into the attack and everything changed.

As they say, Pant has a knack for scoring big against the bald spinners. Leach is definitely among the ones, and the treatments he received by Pant last year in India, as well as earlier in the match, were quite embarrassing. However, while bringing out an audacious reverse-sweep against Leach, Pant was caught at first slip. Still, by the time he left the field, the damage was done with a steady 57-run knock off 86 balls.

Not to forget, Pant has been working as Jasprit Bumrah’s deputy at Edgbaston in Rohit Sharma's absence. He had been attracting criticism for his shot selection and his decision-making ability since IPL 2022 before the England tour, but the way he has responded is simply monumental. People often forget he is still too young, and the way he is shaping up, he may end up one of the brightest wicket-keepers ever in Indian cricket. All you have to do is keep faith in him. The rest will be taken care of by himself. Perhaps, it is too early to give a verdict but the way he is improving, his consistent performance in limited-overs cricket is not too far away as well.

Now, Pant’s primary objective will be to keep the momentum going in India’s forthcoming limited-overs series in England, starting from July 7 in Southampton.