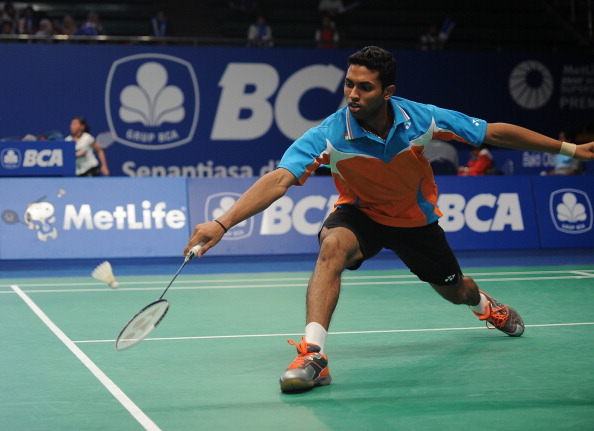 Ahmedabad Smash Masters got a reality check on Tuesday as Awadhe Warriors edged them out 4-3 in a close tie. After Verma lost his grip from a game-winning position against Kashyap, Prannoy and Ying fought hard to steady Ahmedabad's ship before Nandagopal and Reginald failed to rescue it in the end.

Ahmedabad’s decision to start Him in place of Reginald was definitely surprising for the fans especially after the mixed doubles duo was just getting into the groove after a 2-1 win over the seasoned Hyderabad Hunters in the previous game. Him, alongside Juhl, didn’t start on the front foot either and thanks to some crucial service errors by Tang, the Ahmedabad duo managed to win the first game narrowly 14-15.

And it was the lucky that eventually brought the end for the Smash Masters duo. It was Tang’s unforced errors that were crucial in Awadhe’s defeat in the first game and though the Chinese didn’t look to improve in the second game either letting Ahmedabad reduce the margin from 10-6 to 14-10, the debutants didn’t fine-tune their error-prone play from the first game, and Him hit the net to hand Awadhe the second game.

With both the sides having to pay for their mistakes in the last two games, the third game saw better competition with Pedersen being the first to flinch, giving Ahmedabad three straight points to lead 7-4. However, the error-prone Tang had become increasingly confident by now showing good judgment in his leaves and leveled things with a venomous body smash at 13-13. Juhl had shown her resilience at times in the game but she never looked in control of herself as was the case against Hyderabad. Though she kept the side at 14-14 with good net play, Tang emerged on top the match-winning point. However, the Chinese 53 unforced errors in five matches now, something Awadhe should be worried about.

Awadhe’s plan was well set after the first match as a win for their trump card could have them three points ahead of their rivals. However, standing in their way was Sourabh Verma who managed to give a real scare to the hosts, looking a totally different player from the one who lost to Lee Hyun . Though the shuddering defeat would have been discouraging for Verma, the 25-year-old looked at his aggressive best as he simply dominated Awadhe’s trump card to go into the break 8-5. Kashyap had no answer for Verma’s smashes and before he could set his foothold, Verma ran away with the game 15-11.

Kashyap started the second game on the back foot again before some loose serves by Verma and his affinity to deviate from his power play saw go into the break 8-7 ending a thrilling rally with a smash. And this pretty much was the turning point of the whole match as Kashyap had found the chink in Verma’s armor - not allowing him to use his power in shots. Verma further helped Kashyap’s  cause as he looked for subtle placements time and again rather than going all out with brute aggression that had won him the first game. Consequently, Kashyap won the second game 15-13 to bring parity to the match.

The third game was quite strange given the fact that Verma seemed to have got Kashyap’s plot and he didn’t fall into his trap initially going into the break 8-3 and completely dominating his opponent to go into the break 8-3. But, his inconsistency saw Kashyap clawing his way back again to make it 9-9. And though Verma even led 14-10 following that lax, Kashyap knew he had a chance and eventually beat him 15-14.

Srikanth’s passive body language from the very beginning pretty much took the excitement out of the game. The star shuttler had to sit out the last game due to injury and it didn’t look that he had shaken it for this one as well. Prannoy has been invincible in PBL so far and wasn’t going to let the opportunity go. He was seen leading 6-2 in no time and Srikanth’s slow movements were evident that he was not up for it.  It remained shockingly one-sided with Prannoy winning 15-8.

Srikanth, who is known for his arriving late into a game, led 4-1 in the second game giving the crowd a sense of comeback. But, the spark lasted only for a brief moment and once Prannoy got into his flow with strong smashes coming towards Srikanth again, the four-Superseries winner was half at his pace while picking them up. Ahmedabad went on to the take lead at 14-7 and Srikanth’s attempt could only fetch him four straight points thereafter. An out-of-breath Srikanth also saw his challenges going against him and looked like he had already accepted his defeat before Ahmedabad brought the score to 3-1.

It was a real chance for Ahmedabad for equaling the tie and Prannoy’s win had pretty much thrown it wide open. World No. 1 Tai had been unbeaten in the tournament so far and Nehwal hardly had a chance of producing an upset. The queen of deception, as the 23-year-old is known, started plying her trade from the very beginning as she went into the break 8-4. Saina failed to match the tempo of the Taiwan star and most of her points came from Tai’s errors. For all the talk of Saina’s unparalleled stamina in the court, the Indian couldn’t keep up with Tai’s tactics, who distributed the shuttle all across the court leaving the Indian high and dry. The Taiwanese won the first game 15-5 leaving a concerned look in Awadhe Warriors’ camp.

The outwitted Saina had also looked error-prone at the end of the first game, which came back to haunt her after she started the second game with three straight points. Tai was allowed an easy comeback into the game soon and lead 8-6 on the break. Though the Chinese Taipei player committed some uncharacteristic errors in serves and net shots that allowed Saina to lead at 10-9 and even go until 14-14, the outcome was pretty much decided as Tai ended the match as she had started it - a deceptive drop shot that left Saina .

The problem with Ahmedabad’s doubles duos seems to be quite similar to each other - their poor shot execution and inability to handle pressure. The duo of Nandagopal and Reginald had shown mettle and determination in the losing game against Hyderabad’s M. Kido and Y.Y. Seong. They had lost the game but won the hearts then, and Tuesday’s game was nothing different. After starting in the first game, that saw Awadhe go into the break 8-5, Ahmedabad tried to make amends for it yet again but when the real chance came to rise above at 14-14, gave away the game point cheaply with an error.

The second game was the last chance for the duo to give fruition to all the hard work done by Prannoy and Tai and they made a promising start as well going into the break 8-6. However, their occasional momentum wasn’t enough to beat Awadhe’s experienced duo and as soon as they went on the lead at 10-8, it was game over for Ahmedabad. Some late dominance by Reginald to make it 10-10 didn’t help their cause either as they were like the first game, in patches. Awadhe won five straight points thereafter to seal the match and the tie.