Why your team will suck at the Euro 2020: Italy and their so-called Renaissance

Why your team will suck at the Euro 2020: Italy and their so-called Renaissance 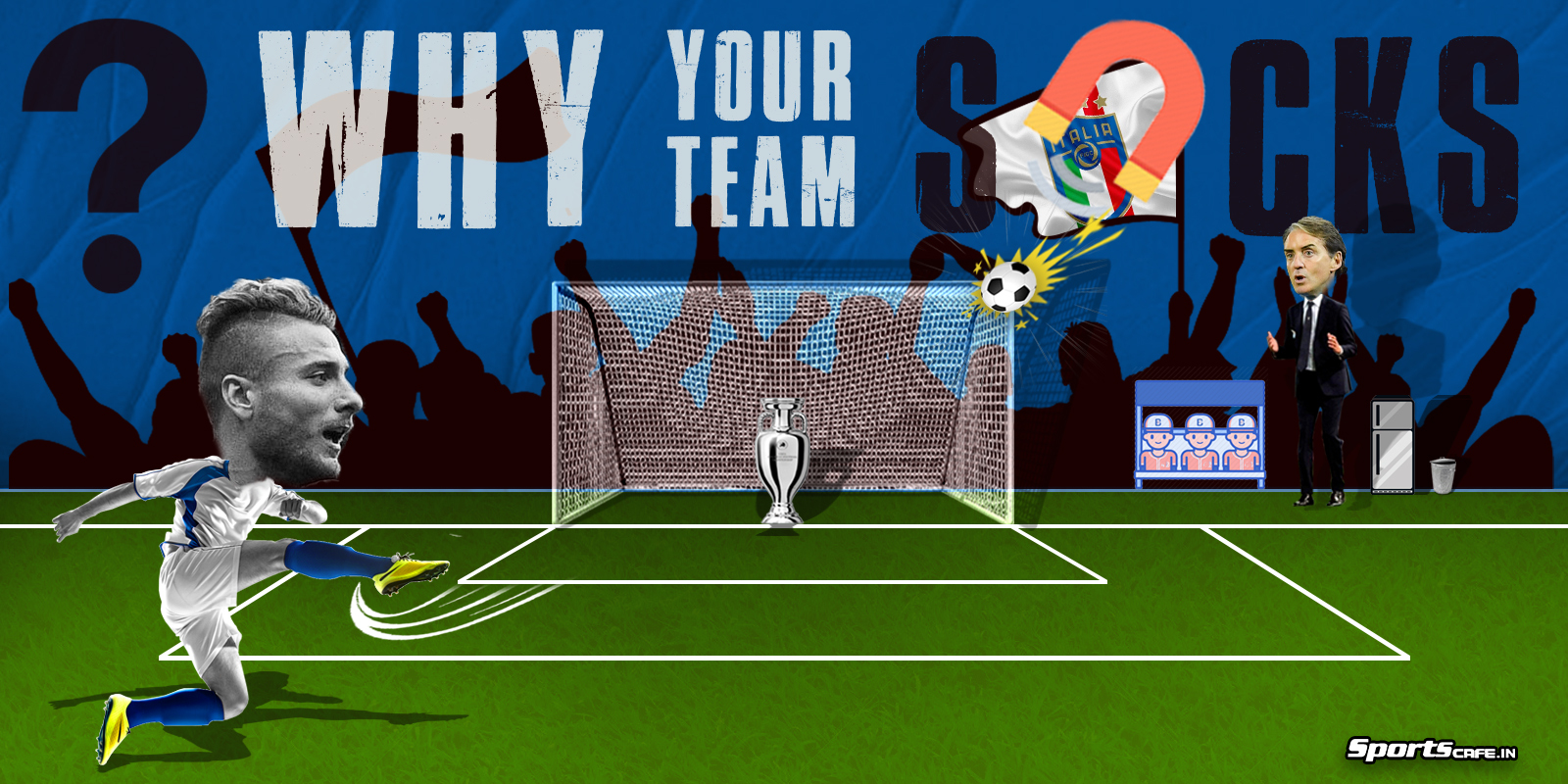 Italy have been placed in Group A

The Italians are back and after the mess that was the 2016 Euros and the terribleness that was their 2018 World Cup qualifying campaign, there seems to be some semblance of a team now. A mix of the new and old, it’s their version of the renaissance and yet here is why the Azzurri suck.

Your team: Italy (Euro record: DNQ four times, won it once, finished runners-up twice and qualified for every tournament since 1996)

Now, these might be the only stats a little skewed. So look at it this way because Roberto Mancini took over as the head coach on May 14th and since then, the Azzurri have lost twice. Meh to say the least, especially when you consider the fact that the losses came to France (just before they became 2018 World Cup champs) and Portugal (2016 Euro winners). Essentially, they lost to the nobodies of football and could have thrashed them had things gone their way. Now beyond that, Mancini’s side has swept aside every possible side they’ve faced with the exception of the Netherlands (twice), Ukraine, Portugal (0-0 draw), Bosnia and Poland, which they’ve all drawn against.

See, much better right? And then it hits you, like most of these pieces, that a quick scan of the games and the Italians haven’t faced anyone worth talking about in a while. Because sure they’ve managed to win 21 games out of 30 under new management, with an unbeaten 25 run to boot, but they’ve all come against minnows. That’s right Italy fans, your team has no proven record against a team anywhere inside the FIFA’s top 20 rankings. It’s a good thing. It means you can stat pad as much as you like and fling the stats out on social media for credit or a more solid punch.

That is what the youngsters want these days, right? Shorter football games and something to brag about to their followers on the interweb? But of the three teams they’ve faced that could actually challenge them, the Azzurri drew thrice and lost two more which kinda says sooo much about this team. Oh, and I haven’t even hit the best part although that kinda-sorta predates this team.

While the core of the Italian side retired after a certain debacle this side still has a few pieces from the side that failed to qualify for the 2018 World Cup. Just let that sink in for a moment because it shocked us all when it happened and three years later, the shock hasn’t subsided at all. Have things changed since then? Sure, if by that you mean new management, a more youthful-looking side and the fact that they’ve never been challenged by a proper contender but that is all set to change.

Mr Renaissance himself. There is literally nothing bad to say about Roberto Mancini because the way he has, almost single-handedly, transformed the Italian side has been majestic to watch. The former Manchester City boss (think Aguerrooooooo) has been perfect for the Azzurri and exactly what the doctor ordered after the mess that was Gian Piero Ventura. There are worse words to call the man that picked Daniele De Rossi to send on instead of Lorenzo Insigne despite the fact his side needed a win to qualify for the World Cup.

Not to drag things but De Rossi sent him packing with a few choice words and the rest is history because Mancini walked in and this is the result. 21 wins out of 30, a stupendous win percentage of 70% and against all odds, Italy are back. How do you say anything bad about the man who transformed the face of Italian football?

Ciro Immobile: Super, duper Ciro Immobile. What can I say about the man who has plundered goals season after season? Other than the fact that the 32-year-old has an international phobia and calling him a superstar, especially for Italy, is an absolute joke. The difference is downright ridiculous and shocking and jaw-dropping and a few other adjectives that would mean more or less the same. It’s like this, Immobile in Italy and playing for Italian clubs is good, maybe even elite.

Move ol' Ciro out of Italy and place him either into the Italian national team or put him in a club outside Italy and he’s crap. Like so terrible that Italy might just have a better chance of shooting from 40 yards and taking their chances. He spent two seasons outside Italy and scored 14 goals in 49 appearances and has netted 13 goals in 46 caps for his country. Not one of those thirteen goals One of those international goals came against in a game where Italy could have used him but it was an international friendly.

The other twelve have come against countries outside the FIFA top 20 rankings. By comparison, Immobile has hit double figures in all but six out of his last seven Serie A campaigns. Not only that, only Lionel Messi, Cristiano Ronaldo, Robert Lewandowski, Harry Kane and Kylian Mbappe have outscored him since the move to Lazio. So the problem lies outside Italy? Well, secret superstar, you’ve got your chance because all three of Italy’s group stage games are played in….Italy!

Gianluigi Donnarumma: The heir to the great Gianluigi Buffon, Gianluigi Donnarumma even shares the first name with the Italian legend but unlike Buffon, Donnarumma is the modern superstar. The bells, the whistles, the ten million a year wage demands, a superstar agent who’d rip the world apart for his own good but talent, so much talent for a 22-year-old. His problem isn’t the fact that he can’t play football or replace a superstar in Buffon, but whether he actually has the time to step away from playing the Nintendo Switch to do so. Not everyone is Andrea Pirlo after all.

The lack of solidity/structure to this side and that’s not a joke. The Italian teams of the past boasted defensive quality the likes of the world had never seen before but more importantly, their midfield was solid as a rock. Players you couldn’t move even if you smacked them full-tilt with a truck but then there’s the modern generation. A fly hits them and they crumple to the ground like an epic compilation of Neymar highlights.

The level of technical skill is pretty impressive, which is the case for every single football team going to the Euros, but Italy lacks a solid base to help them out. And if you’re seriously telling that a core of Nicolo Barella, Jorginho and Marco Verratti in midfield are as solid as they come, well then you need a serious re-education in football.

This comes a close second though, to their announcement video. What happened to the simple releasing of lineups man? Keep it simple and don’t dress your players up in Armani suits looking like a catalogue of men auditioning to be James Bond villains and singing songs. This generation, I tell you and it was a two-hour television special with frying pans being brandished about, who was time for that? Everyone apparently.

Their centre-backs. I mean that quite literally because at 22, Alessandro Bastoni is the youngest out of the lot with Francesco Acerbi at 33, Leandro Bonucci at 34, Giorgio Chiellini at 36 and Rafael Toloi at 30. Acerbi’s story is a gem and he does walk into the tournament as arguably one of the best Italian defenders around but the other two, they’re just old. Both Bonucci and Chiellini have been outplayed, outrun and outdone by a pressing style in the past with Barcelona, yes you read that correctly, outdoing them as well.

It’s a genuine concern as to how Italy are going to defend when their main men, and captain, need crutches and walking sticks to move about. Sure they can pass the ball, but can they do it without breaking their limbs after hitting the regulation size 5 ball? Or do we need to tweak the rules and get a size three or something softer? Maybe on the safer side, Italy should ask everyone to play 36-year olds to help their case or maybe, just put Jorginho in defense. It won’t be any worse, now, would it?

On paper, this team isn’t the worst of the lot. On paper, this Italian side strolls out of their group stages unscathed before, maybe, falling down in the quarter-finals or semis if lucky. Because – if you ignore my ageism and everything above – then this side has a world-class midfield backed by a solid, reliable and maybe even the most consistent defense. Their biggest, and maybe only, the problem happens to be that front-line that can’t score a goal to save theirs or anyone’s life for that matter.

Age seems to have made Lorenzo Insigne a little wiser, as his 19 Serie A goals last season proves, but his 8 for Italy is a little concerning. Domenico Berardi has done well for himself with Saussolo but he’s scored 5 in 11 caps while Federico Chiesa has 1 goal in 25 caps. Combine that with Andrea Belotti (33 caps, 12 goals) and Ciro Immobile (46 caps, 13 goals) and the problem is obvious. Yet, the month of their lives or rather seven games, and Italy could be golden. Big could there but miracles have happened in the past and yet, Roberto Mancini’s side are capable. But can he do it without Aguerrrrroooooooooooooo?