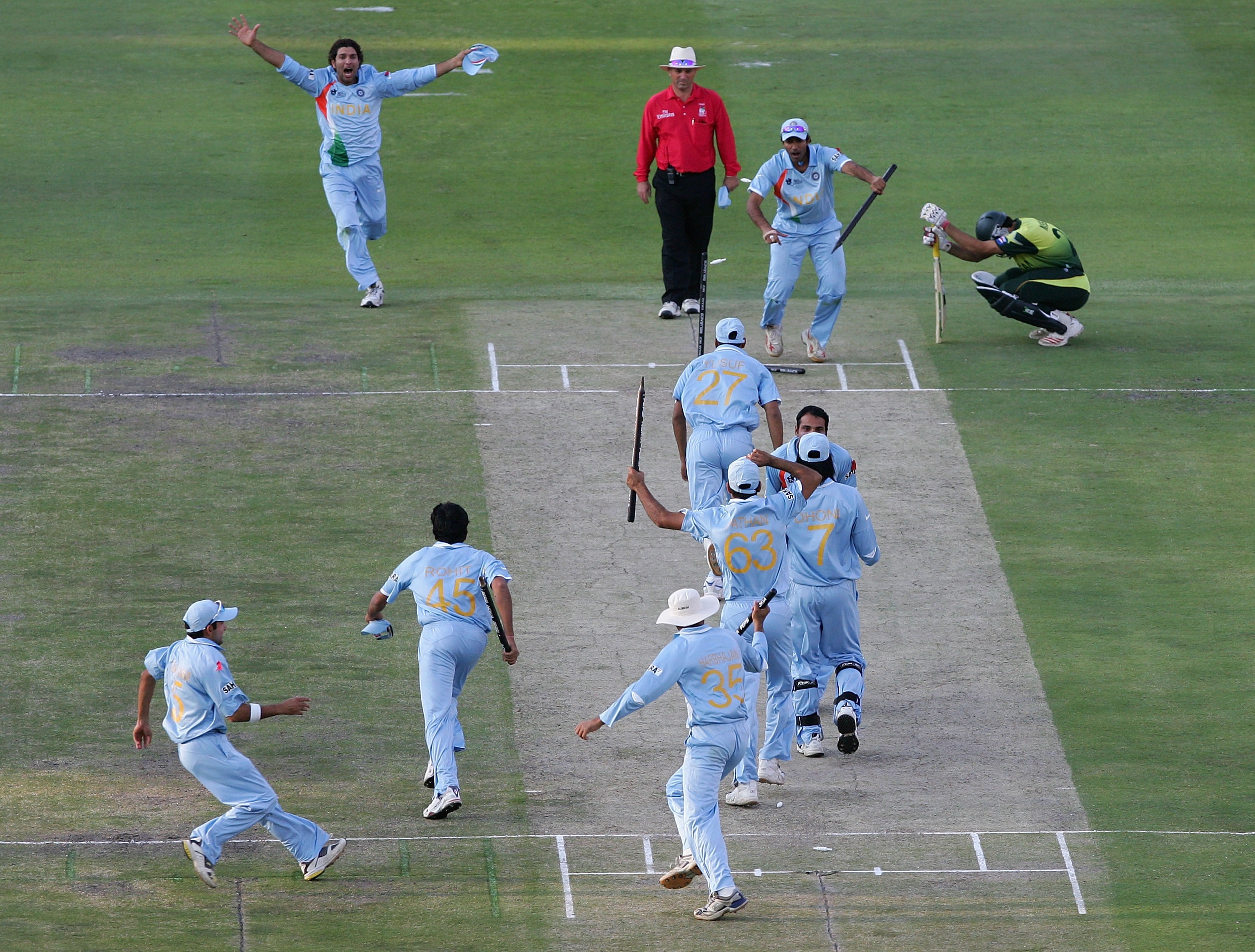 In the aaiirrr... and Sreesanth takes it...” - These lines yelled out by Ravi Shastri shall reverberate in the minds of the Indian fans for a lifetime.

For a generation that grew up watching cricket post-1983 would never know about how it felt to watch Kapil Dev and his teammates lift the World Cup in the Lord’s balcony on a historic English summer evening. The Misbah scoop that fell safely in the shivering hands of Sreesanth that handed India the inaugural Twenty20 World Cup would be their ‘Where were you when’ moment.

After a dismal showing in the 2007 ODI World Cup in the Caribbean, the team had to make different stops en route India and were escorted through the back door of the airport and their transit stay. The cricket-crazy nation just could not come to terms with their premature exit and down harshly on not just the players and their residence, but it also had a bearing on their families.

Just when Team India needed a change, the biggest paradigm shift came through in the form of the T20Is, more specifically, the inaugural ICC World T20 in South Africa that year. While the World Cups usually come with their own pressure, T20 cricket was never perceived to be a serious affair by most nations. Like others, India too announced a very young side to participate in the inaugural edition under the leadership of MS Dhoni (The big three, i.e. Sachin Tendulkar, Rahul Dravid, and Sourav Ganguly had opted out of the tournament in a bid to provide opportunities for the youngsters). Prior to the T20 World Cup, India had played only one T20I against South Africa.

While T20Is still in its nascent stage, India started lapping up the format with every Indian win as they made inroads in the tournament. The real fillip came through when India defeated arch-rivals Pakistan in a never seen before bowl-out contest in the group stages. This heralded the birth of a new love - the T20 affair. The part-time bowlers, who took to bowl-out with their uncanny accuracy, the six sixes by Yuvraj Singh off Stuart Broad quickly became a big part of the Indian cricket's folklore.

Then came the clinical yet surprise entry into the dream finale against neighbours Pakistan. Till the last 4 overs, India had the game in their pockets but Misbah turned the match on its head was the last thing one could have imagined. But as history has it now, it turned out to be a fascinating battle between the two arch-rivals. With anything but a mystical 13 needed to be scored off the final over, another unknown entity in the form of Joginder Sharma took the charge of bowling the final over.

With a wide and a six to follow in the first couple of balls of the over, half of India would have lost its breath and given up on the team. But then came the moment which has been replayed over and over again. An untimely, infamous, and unceremonious scoop from Misbah went up in the air, Shastri’s Adam’s apple came right out of his throat, his vocal chords literally tore up, half the country covered its face in their hands, some looked up, not at the ball but at the heavens with a desperate prayer on their lips, and Sreesanth caught the heaviest ever cricket ball on the field. India had won a World Cup! Dhoni, India’s new found 'Hercules', handed his jersey away to a young fan and walked around bare-chested, swelling up with immense pride and joy, which perhaps no shirt could have contained.

On the night of September 24, 2007, the fireworks lit up the Wanders sky, and the Dhoni’s "Youngistan" stood tall holding aloft the trophy, the image which has gone as one of the most iconic in the modern Indian cricket history. 10 years have gone by since then. Narratives have been subtly undergone a change so as to further romanticise the journey of a team no one gave a chance to be world champions.

The open bus victory parade on the rainy streets of Mumbai that followed was a spectacle that none would ever forget. The rain didn’t deter the city from coming out on the streets and applaud the team and a sport they had turned their backs on a few months back. The lineage of Indian cricket found fresh blood, and a whole new generation was inspired to take up the game. Life changed for many since then. And with the win, the course of cricket has also undergone a massive metamorphosis.

The same country, which was about 4 weeks ago, was threatening to lap up the format, embraced the T20 affair in a big way and heralded a new dawn in world cricket launching the Indian Premier League, which very soon became the centrepiece of the cricketing landscape. It acted more than just an undercurrent for the popularization of the sport. So, it is not at all a bad idea to remember where we were that day when the game was on ‘cause this truly is ours, and only our, “Where were you when” moment!