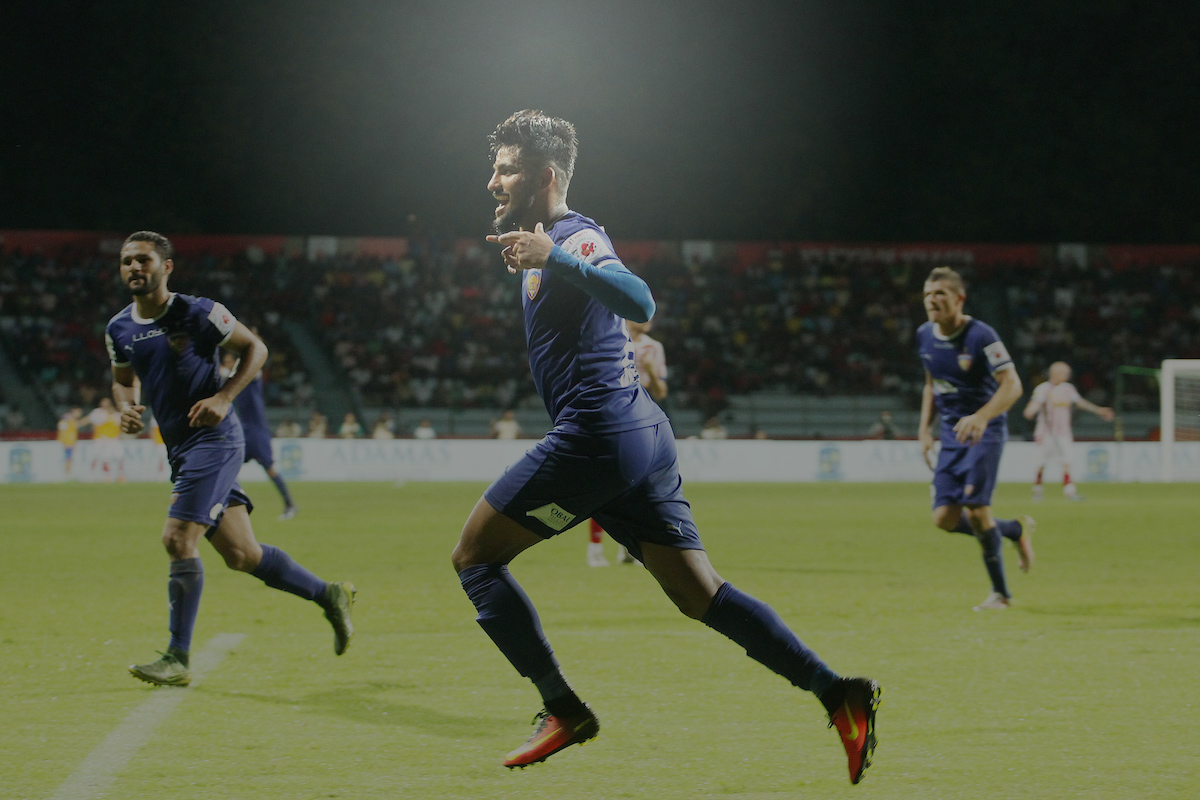 Not every story starts perfectly. In fact, the ones that don't are the stories which are at times more memorable. This is a similar story of a boy born in the city of dreams, who is now living his dreams. A dream which began when he held his uncle's hand and visited football grounds across the city.

Things have changed for him. He stays in luxurious hotels, travels by air almost twice a week, features in interviews, and has his own bunch of fans who chant his name and carry banners to the stadium. Life now is in stark contrast to what he had in the past, and Jayesh remembers them, most of the time fondly.

“I did not really have a good background to speak of. My parents worked hard and it is because of them that I am where I am. My uncle was a big influence back then. He played in the Mumbai league, and I used to go with him to watch those football matches, and that is how I got into the sport. Things were not too good back then. But, they are now,” said Jayesh with a sense of satisfaction in his voice.

Amid all the opulence that the present day holds for him, he still misses few things of the past. “I miss my school friends. We used to play football most of the time. Those are the times I miss most,” he said. Along with the pleasures, his new life has also brought along few of the of celebrity-hood. There are a few boundaries he is not allowed to cross anymore. “I am in touch with them (school friends). Just that you are not allowed to go out at will anymore,” he added. However, he won't switch over to his previous life. He has worked too hard to reach where he is at the moment. “I am happy with where I am right now,” he said with a lot of conviction.

Brazilian legend Ronaldinho was his biggest idol. Jayesh admits he was dazzled by the former Barcelona star and his tricks and skills on the ball. “I wanted to be like him,” Rane said. However, there was one person, closer to home, who had influenced him more than anyone else. Someone who introduced him to the romance of football along with all the promises it holds. The only regret for Rane is the fact that his biggest idol was not present when he, eventually, made it big in football.

I was not really into sports back then. I wanted to be a doctor.

“My uncle was my biggest idol. I wanted to be a footballer like him. I wanted to play like him. Unfortunately, he never got to see me making it big in this sport. He passed away a long time back,” he regretted.

Without his uncle, Jayesh Rane would have perhaps been a doctor right now. “I was not really into sports back then. I wanted to be a doctor, and I studied for that. I played football just for the fun of it. It all changed after class 10, though,” he said.

Football in school days usually translates to a celebrity-like status off the pitch. Rane was very famous in his school, but evidently, he was quite shy as well. When asked if he received special attention from the girls, he laughed and said, “No, not from girls. I wasn't into girls. I mean I am into girls, but not that much.”

But soon, he had passed the fun and frolic of school life and stepped into a world of cutthroat competition. The man who ushered him into that world and prepared him for what is to come was Khalid Jamil—the former coach of the I-League club Mumbai FC.

“I would say of all the coaches in my career, Khalid Jamil had the biggest influence on me. I came for a trial in U-13, and after watching me play, he promoted me to U-19. I never played U-16. He took care of me and made me into what I am today,” Rane said.

The 23-year-old, like many, still cannot fathom Mumbai FC without Khalid in it. The 39-year-old stepped down as their coach earlier this year—and that is something Rane still does not agree with. “It was surprising. He was one of the few people who were there from the start, first as a player and then as a coach. So, yes, it was sad to see him leave. I think he should have stayed,” he adamantly added.

Mumbai is in the past now for Rane, though. He has moved to a new city, a new club, and a new set of fans. Last year, while Chennaiyin were fighting to win the ISL crown, the city and its people were fighting for their survival.

“I like Chennai. I especially like the people. The way they support our team. Last year, despite the flood, they supported us. Our manager we are not only playing for ourselves, but also for the people of the city. We wanted to win the trophy for them,” Rane said.

Chennaiyin did win the trophy and it was Rane who had assisted Mendoza to score the winning goal. His performances on the field have earned him a lot of praise from his manager Marco Materazzi, who had labeled him as someone whose work rate is “as per European Standards”. Training under someone as experienced as Materazzi has worked for the rising Indian star.

According to Rane though, the former Italian international is not everything the media portrays him to be since that infamous incident with Zinedine Zidane in the World Cup.

The media portrays what the media wants to portray. That is not the truth always.

“What happens on the pitch usually happens in the heat of the moment. Emotions run high at that point, and your action does not reflect on the person you are off it. Materazzi is a completely different person off the field. He is brilliant at inspiring people. The media portrays what the media wants to portray. That is not the truth always. You do certain things on the pitch in the heat of the moment. But that is different from who you are,” he said. However, he was quick to add that he is not too different from how he plays on the pitch. “I am not different on and off the pitch. I would not go around kicking people on the football field. It is not who I am,” he added.

While the Indian Super League has done wonders to highlight young players like Rane, it has also brought about a lot of controversies off the pitch. As I-League and its clubs fight for its survival, the AIFF has been criticized for its inaction. However, understandably, Rane chose not to speak about the AIFF's new for Indian football, and instead he opted to focus on the positives that are there at the moment.

“The biggest positives are the academies through which a lot of youngsters are coming through. The U-17 World Cup will also be a big boost for the young players in this country,” he said. When asked whether he feels that the nation is ready to host an international football event of that magnitude, he said, “Yes. why not? If we can host the cricket world cup, we can also hold such tournaments.”

When pointed out that cricket already has better infrastructures in place, he countered by saying, “that is true. But, things are improving now. With the ISL, the infrastructure has improved a lot.”

His positive outlook towards everything also extends to his own career. Like most of the rising footballers, Rane too hopes to play overseas someday, and he knows exactly where he would want to play. “Yes, of I want to play abroad. My dream is to play for Barcelona someday,” he said. He also added that no such opportunities to play abroad have arrived yet.

The 23-year-old is yet to feature in the senior squad of the Indian team, but he is banging on the doors. Marco Materazzi believes Rane will soon feature for the national side. Rane is not too worried, though. He continues to work hard, and he continues to scale peaks. This is not the last time you will hear the name of this rising star from Mumbai.